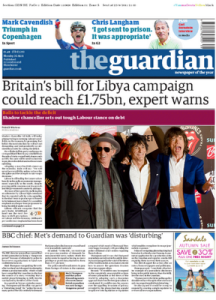 John Lennon, in reply to a question about whether Ringo Starr was the best drummer in the world, answered ironically that ‘he wasn’t even the best drummer in The Beatles’. Ringo described himself as “your basic offbeat drummer with funny fills”. He was much more than that though, for all the lauded creativity of Lennon and McCartney, Ringo was the pulse, the signature feel of the band.

Charlie Watts, the drummer of that other 60s popular beat combo, the Rolling Stones, is at 71 about to go on the road again. For all the pomp of Jagger and the legendary antics of Keith Richard, Watts, like Ringo is more than the rhythmic timekeeper. He gives The Stones  their musical swagger. David Hepworth, the excellent media and music commentator, calls Watt’s contribution as ‘giving them the way they walk on stage’

Tickets for two 50th Anniversary concerts by The Rolling Stones went on sale today. One ticket up in the gods of the 02, for which you’d probably need climbing gear to get to as well as oxygen, will set you back just £460. Something slightly closer to the action approaching £2000.

A few years back bands rarely made any money out of live performances – these served only to raise profile and drive sales. Now, even at more normal prices, revenues from live performance are often the primary income source for most bands because they no longer make enough money out of selling CDs, vinyl or even legal downloads.

In another part of the media/entertainment forest there was a story this week that The Guardian is considering abandoning the printed paper entirely and going ‘digital only’.

Why would they seriously even consider doing that?

The printed page is the drumbeat for any newspaper. The feature columnists and the by-line staff writers may be the Jaggers of the brand but how their work looks on the page, how it balances pictures and words, how the paper is laid out gives the newspaper its identity – its rhythm and unique signature.

Revenue from the printed paper is undoubtedly less than it was a decade ago but it’s still measured in pounds as opposed to the pence of their offline income. If any of the newspapers manage to invert that ratio and genuinely make money from their digital presence – and it’s a big, unproven if – abandoning their signature rhythm will probably be a great mistake. News vendors with only a digital face – like The Huffington Post– still mimic their printed paper cousins in presentation.

For any brand the need for constant vigilance over what keeps the brand DNA alive is paramount. What may be today’s revenue driver may not be tomorrow’s. What makes the business relevant will almost certainly need to change over time: but what keeps it differentiated will the constant drumbeat of brand.

This article was originally posted on the CRICKET blog: 19 October 2012