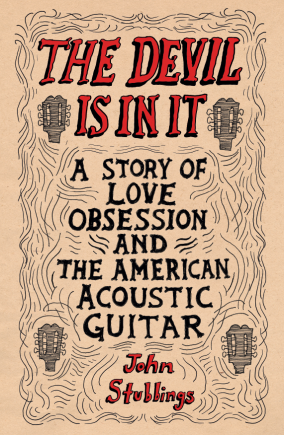 Twelve years ago I ordered a bespoke, custom built acoustic guitar from an experienced and well-regarded English guitar maker. Our joint expectation was an 18 month wait before completion. Ten years later I was still waiting.

Starting out as a teenage guitar player, by my late 40s, and to my own surprise, I was a fully fledged collector who occasionally played guitar. I realised I had contracted an extreme and unreasonable enthusiasm for guitar acquisition – what is often termed Guitar Acquisition Syndrome. Before I inevitably acquired more instruments, I needed to understand why and how this had happened. How had the 18th century Spanish guitar been transformed, by the 20th century, into the modern American steel string acoustic that had such a hold over me and many fellow multiple acquirers?

The resulting book is part music and social history, part travelogue and a deep dive into the nature of guitar making and the obsessive nature of guitar acquisition. Award winning music journalist Mark Ellen has described The  Devil Is In It as “a terrific achievement – wide-ranging and informed – affectionate, funny and beautifully written”.