Dick Boak joined Martin Guitars in 1973 while in his late ’20’s, having lived the life of a boho artist on both the East Coast and in California. By the time he joined Martin he’d built guitars, was an accomplished technical draftsman, a gifted artist and played pretty good guitar. Martin was still at that time a pretty conservative company and whilst recognising Boak’s abilities had no idea what to do with him. He worked as a guitar maker but soon created a studio for experimental designs, he ran marketing for a while but most famously became the guy who in 1992 persuaded Eric Clapton  to let Martin make a signature edition guitar bearing his name. 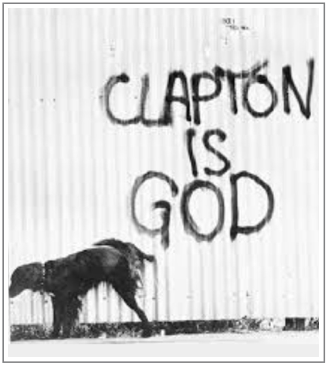 Clapton had just made MTV Unplugged, but prior to that he was the god of the electric guitar….

Clapton was synonymous with the Fender Stratocaster, not the acoustic folk guitar, the working tool of the introspective singer-songwriter.

But the Clapton Unplugged CD ‘went Platinum’ selling 24 million copies worldwide, the DVD went whatever best selling DVD’s go and ‘Layla’ was now as famous as an acoustic song as it was an wailing electric solo fest. Importantly the guitars that Clapton used on the session were a selection of vintage Martin acoustics.

Boak’s proposal to Clapton was that they make a small limited edition of a new guitar based on his favourite vintage Martin’s and that a percentage of the proceeds go to Clapton’s Crossroads drug rehabilitation charity. The big challenge was to guess what the demand would be for an $8000 guitar – given that the average price of a Martin at the time was around $2000 this was not easy.

“In the end I guessed and just suggested we make 461 guitars – in recognition of Eric’s most successful solo album, ‘461 Ocean Boulevard’, the address where Eric was residing in Miami during the course of the  recording of the album”

There have been 160 artist collaborations since, and along with running all artist relations, the Martin museum and designing a few more guitars Boak has been responsible for the revitalisation of the company’s fortunes. He is allegedly highly mercurial, a pain at times, has been fired once but is generally revered across the business. He seems like the veritable grit in the oyster.

I’d completed the factory tour just before I met Dick. It was impressive… 600 employees, lots of high tech equipment, but lots of hand finishing too, obsessive quality control everywhere, all as you’d expect of a modern guitar manufactory competing with domestic and Far-Eastern players. It was perhaps a little soulless but it’s a tough market and the business can’t rest on sentimentality.

I think he sensed my disappointment when we talked about my tour but we chatted about the realities of a family run and owned business, and a business where, he reminded me that “whole families in Nazareth rely on Martin to put food on the table”.

I told Dick I owned a small Martin from the 1950’s. He immediately asked, “Do you want to see where it was made?”
When Christian Frederich Martin moved from New York to Nazareth in the late 1830’s he bought a house for his family in North Street and converted the barn on the adjacent lot into a workshop. And Martin & Co. stayed on that site and in that original building, give or take a few outhouses, until 7th July1964.

In the beginning his 6 employees plus his son who worked there on Saturday’s, were pretty much working in the luxury of space, the young Christian Martin is second from the right…

By 1960 there were 40 employees crammed into every nook and cranny of a building and with the  early ’60’s folk boom production finally out-grew the space and they gradually swapped production to a new factory. 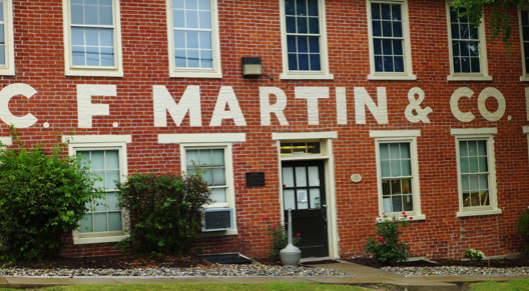 We drove the two miles up the street to the North Street site and walked up the stairs to the workroom on the first floor.

“Your guitar was made sixty years ago at one of these half dozen benches”. 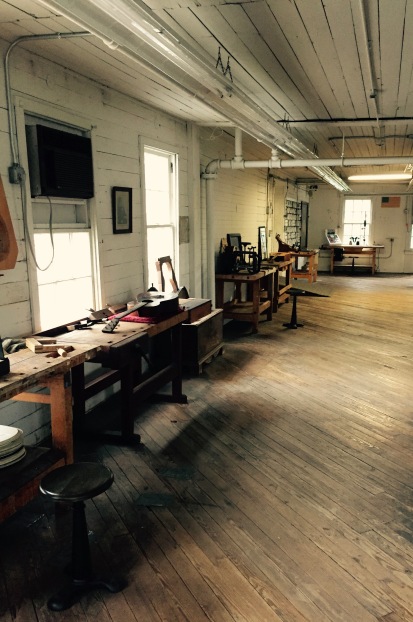 For 40 years Martin used the building to store stuff – old machines, cases, packaging and then it just became a dumping ground for anything they couldn’t bear to throw away. But under the chaos the old workshop was preserved, until earlier this year when Boak started uncovering it. It’s been tidied but not restored.

I walked alone through the maze of rooms, an unintended museum to guitar making in rural Pennsylvania – on a wall written in pencil above a workbench is a record of the incidence of early and late snow across the 1940’s. All in the same hand. It is, as Jim Croce once sung, “Time in a bottle”.

(This blog entry was first part of a private series of blogs made in October 2015. I have only recently uploaded them to my blog site… so you may have read it before)