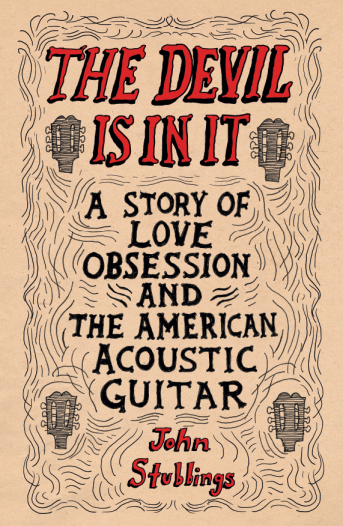 My blog postings have been few and far between recently as most of my writing energies have been diverted to the writing of The Devil Is In It: A Story of Love, Obsession and The American Acoustic Guitar. Just published through the Orpharion Press

I first started writing a book that was going to be called Two Guitars in June of 2014 during a sailing trip around the Greek Islands. Sitting in the Stella Cafe on Symi I’d been able to pick up my e-mails for the first time in three days. Amongst a few work mails and offers of easy dollars from exiled Nigerian government officials, there was a welcome one from a guitar maker, or luthier, from Fallbrook, California. It was his regular e-mail update on a custom made acoustic guitar he’d started building for me 6 months earlier. Having carved the neck he was just starting to inlay Mother of Pearl position markers into the fret board and confirmed that the guitar would definitely be finished by the time I came out to California in the Autumn.

As I scrolled further down my e-mails there was, more surprisingly, one from another master luthier but one based closer to home in Kingsclere, Berkshire. His e-mail was also about a custom made guitar I’d commissioned from him, announcing that it too was getting close to completion – in fact he thought it would be ready in early August.

The only difference was that this was a guitar that I’d commissioned 8 years earlier and almost given up on ever actually seeing. I’d last heard from him about a year before when he reassured me that my guitar was getting ‘closer’ to completion – since then there had been a not uncharacteristic ‘radio silence’.

However, both were pieces of delightful news but like much good news it came at a price. I now had only a few weeks to find the balancing payments on two hand-made guitars – an amount equal to the price of a decent family car.

The whole situation got me thinking about the fact that I’d almost unknowingly changed from a guitar player to a player/collector and now as the prospective owner of fifteen guitars was fast becoming a collector who occasionally played.

The book was going to be the story of those two specific guitars and how the guitar has a strange energy capable of inducing addiction and obsession amongst guitarists and guitar makers alike.

But as I started to write I realised that the book was primarily about the allure, power and incalculable influence of the guitar on music, on society – and on the individual.

It’s about the extraordinary – at times almost accidental – development of this once little respected instrument that completely reshaped 20th century music.

I anticipated finishing late 2015, but after realising that while I knew a lot about the guitar there was much more to understand, much more to discover, it took a lot longer. while yet… I’ finally finished writing late 2018. What was initially a lot of desk research became a road-trip in America, the spiritual home of the modern guitar, from New York to Pennsylvania where the world’s oldest guitar manufactory still produces instruments; from North Carolina and the Appalachians where hillbilly and country music has its roots to Memphis and Tennessee; and finally a journey through the Mississippi Delta ending up in New Orleans. You’ll find the contemporaneous blog I wrote from that journey on here too.

My intention was always to produce a few hundred hardbound copies made by an artisanal bookbinder and sell off a dedicated website. While targeted initially at guitar players and modest guitar collectors I hoped to produce something that is to guitars and modern luthery what Dava Sobell’s excellent ‘Longitude‘ was to navigation and clock-making.

It was finally published through The Orpharion Press in October 2019.