It all started with a piece of Honduran Cocobolo, a variety of rosewood that visually rivals the endangered and now almost impossible to find Brazilian Rosewood. The piece came our way via another luthier who, having bought it with some other pieces, couldn’t see himself using it.This was because he saw that it would be difficult to get even a parlour sized guitar out of it. John had acquired it and set it to one side, so when I was in his shop looking at wood was intrigued to see if I might be able to use it.

Cocobolo is a dense, stiff tropical hardwood that often has fantastic figuring and a rich orange hue. Sonically it is similar to koa with a fairly bright tone, but offering a brighter rosewood sound but with less bass and a little more treble zing. However, because it is such an oily wood it’s difficult to glue and can be a challenge for luthiers – not least because the saw-dust can create allergic reactions.

With its sonic properties and the size restrictions I started thinking about having a small guitar built around the wood. It would just about give us what Martin call a Size 5 guitar and I’d always hankered after a small bodied guitar that would lend itself to Nashville Tuning.

All of this was back in June so after some time working out details we agreed a build slot for late 2013. Because John had never built a guitar of this size he spent a couple of months designing and constructing a custom body mould.

We pondered whether we might go for a unique shape – perhaps a slope shouldered Ditson style body would work in this small a size. An Australian luthier called Jack Spira built small guitars in the style of Ditson (see left) that I liked but in the end we agreed that a classic Martin parlour guitar shape from the early 1900s would work best. After looking at various options we decided that the Martin Size 5 shape was the right way to go. The Size 5 was designated a terz guitar – from the German for ‘third’ because the instrument is tuned a minor third higher than standard guitar tuning. In the mid-1800s there was lots of duet and trio pieces written for a combination of standard and terz guitar – the terz being higher, rang out above the standard guitar.

In later years small terz guitars would feature on country records as an accompaniment and compliment to standard tuned guitars – layered together they avoid the often muddy sound of a twelve string. Also, artists like Marty Robbins and Dolly Parton, amongst others, appeared and recorded playing a Martin 5-18 terz guitar. This higher tuning became known as Nashville tuning and was used on a variety of popular recordings including ‘Wild Horses’ by The Rolling Stones, Hotel California and Hey, Mr Tambourine Man and more recently by Sting on ‘Dead Man’s Rope’ from his Sacred Love album.

Martin had Terz guitars in their standard catalogue in the early 1910s and through the Depression years. Through Dick Boak’s efforts they introduced a couple of modern day versions… most notably the Sting special edition and a small run of Style 41 appointed guitars that were built as custom orders for ‘friends of the family’, Sting, Springsteen and Neil Young.

With the mould for the body finally built we were able to start the construction of the box. The sides go through the usual frightening 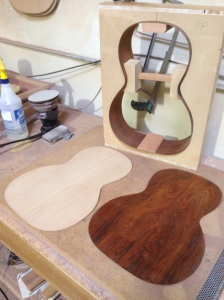 process of soaking, steaming and bending in the side press. As Cocobolo is such an oily wood I didn’t think there was a fear of splitting but for me this is such a risky business… seeing wood soaked and then bent to such extreme curves… particularly at the waist of the guitar.

At the same time the cedar top and cocobolo back were cut out and offered up. It all looks so simple at this point but these are the sonic foundation stones of the guitar, the vital parts that more than any other determine the sound the instrument will make.

They are however only the raw ingredients – they need to be played with to deliver their best. The top will be sanded and ‘voiced’ by the luthier. How these key components are joined together will affect the sound. This is the difference between a hand-made guitar and one made by many hands in a factory production line process.

We are a few weeks on now – and the box of the instrument is finally completed.

The sound hole has been cut and the rosette inlay has been added. This together with the back-strip are both able to be done when they are separate components. The other decoration can only be completed once the box is constructed.

This is always a risky stage. The fundamental structure of the instrument has been built… and a lot of materials and time has been invested. However there is still a lot of work to be done, and much that can go wrong.

However the box sounds great even in this early stage. Just tapping the top you can begin to hear the timbre of the instrument. How the cedar is resonating with the cocobolo.The tightness of the body sound will open up with playing.

An experienced luthier is like a wine maker … able to taste a young wine and be able to project what it will taste like after 5 or 10 years maturing.

guitar box and add decoration. My guitar is being bound in Curly Koa. It’s highly figured and very decorative but the intense figuring also renders the wood slightly brittle… so bending it is tricky.

However the figuring also means that the wood is harder and all the better for acting as a protective edge – its primary purpose. Just inside the koa binding is a decorative strip of abalone, itself bordered by very fine strips of black and white wood stripwood. The koa has been steamed and shaped in the same way the sides of the body were – soaked in lots of water and then steamed and allowed to dry before being glued into place. 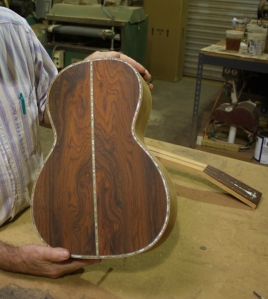 The box is finished now. The binding has been sanded down and we are ready to start the preparation for the first coat of filler lacquer.

Meanwhile work starts on the neck. I’ve decided to move away from my preferred slot-head option. Even though I’m after a 1900’s style guitar paddle or solid heads were being produced then and aesthetically I think it suits the size of body that this guitar will have. Whatever option I do want a neck with a pronounced volute arrow head under where the headstock meets the neck. In the 1900s the volute was functional – in that it was an extension of the scarf joint that was used to join the two sections of neck. These days it tends to be more decorative as this neck is carved out of a solid piece of mahogany. 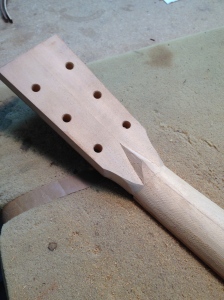 The neck is made out of a solid piece of timber – in fact two pieces of the same piece that have been split and then turned through 45 degrees so that the grain is strengthened. It’s a way of making sure that the neck doesn’t warp. There will be a truss rod to add stability and enable the neck to be adjusted during its life but this natural form of stressing the same wood means that warping is minimised.

The piece of timber is first roughly shaped using a bandsaw. Having got to a basic neck shape it is then hand-carved using the same tools that would have been used in the 1900s. The roughed neck soon begins to take shape and soon is at a stage where the fine finishing can begin. A CNC machine would do it quicker and possibly more accurately – but we are going for perfection not accuracy… two very different things! 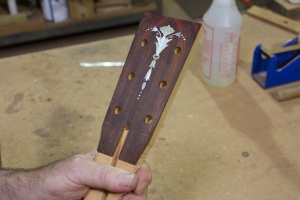 The holes that will accept the machine heads also need to be drilled before the neck goes into the finishing stages. This means that the faceplate for the neck and the inlay needs to be completed. The faceplate is in Cocobolo to match the body and the inlay is a version of the classic Martin ‘flowerpot’ design.

With the headstock completed work can now start on finishing the neck and planning the inlay. I’ve decided to go for a classic Style 45 inlay, which involves snowflakes and diamonds from fret one all the way through to the 17th fret. The neck and headstock border are also going to be bound in Curly Koa – with a border of abalone around the headstock. It will pull everything together without, I hope, making it all a bit too blingy. The challenge with a small guitar is that ornamentation that works on a standard size can start to get muddled when there is a limited amount of distance between decorated areas.

This is the finished fretboard inlay before we start the process of border binding. Again my concerns about too much adornment on such a small instrument have returned. In the 1900s, when this size of guitar was a standard catalogue item, the company really shied away from instruments with too much decoration. Even when they promoted their Style 42 guitars with an pearl purfling on the top the bills stressed that “the pearl is quite narrow, giving a rich effect without being prominent”. I hope that we may just be the right side of richness without undue prominence! 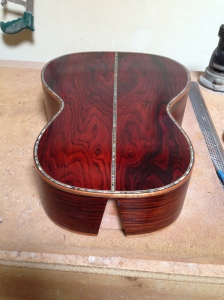 After some more sanding work the body has had its first coat of filling cellulose, sanded back again and in this state is now holding a the lacquer. While we are some way from the finishing coats the body colour is nothing short of magnificent. As much as I love Brazilian Rosewood the colours of the Cocobolo are so rich… almost bedazzling. The Curly Koa  binding is also looking great, very sympathetic to the body tone-wood.

This photo also gives a good view of the dovetail joint ready to receive the neck joint. All cut by hand and fitted by hand. Richard Hoover of Santa Cruz guitars made a video recently where he explained that while the SCGC is not against using CNC machines crafting, adjusting and fitting by hand gives, for him, a better fit.

Update: I’ve been travelling and just got back to see the finished guitar – and it looks pretty amazing 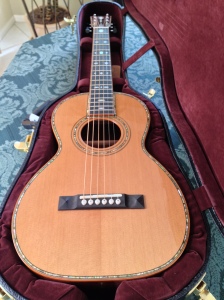 While I was away the neck was bound with the same Curly Koa as we selected for the body. I was concerned as ever that it might look a bit blingy but it seems to pull everything together. We had decided some weeks ago to go for a classic pyramid bridge and a compensated saddle to adjust the intonation. It plays nice back to the early 1900’s vibe of the guitar, when pyramid saddles were de rigeur on most small guitars.

I’ve just spent an hour playing it in a little – it has such a sweet well balanced tone… even with standard strings it rings out. I’m going to get used to how it sounds with standard strings before I start trying the Nashville tuning on it. But all in all I’m so pleased that we’ve got to a finished guitar that both looks and sounds as good as I hoped it would be all those months ago. I think we’ve done justice to a beautiful piece of Cocobola!