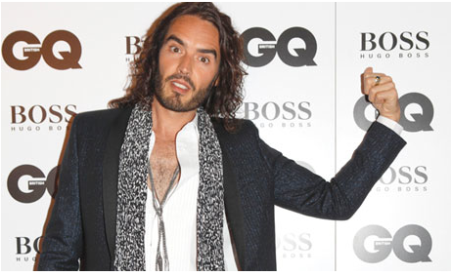 Let’s face it, in the pretty vapid world of all awards, magazine-sponsored awards like the recent GQ Awards are at the bottom of a wobbly pile. After Brand slighted the sponsor who funded the party, Dylan Thingy as editor probably had little choice but to throw him out. Given that Brand probably only attended the event to raise his media profile in the light of his new tour, he can hardly have been that disappointed. Prior to Brand’s ejection, only a few hundred drunk attendees even registered that Brand was there. As a consequence of throwing out Russell Brand, he and the Boss Nazi story are the only news about the awards that’s being printed.

Now, if you invite Russell Brand to your event, and particularly plan to give him an award, then you should be prepared for him to do what he does best:

The next day The Daily Mail, no friend of Brand having poured petrol and applied the flame on the Sachsgate affair in their long-term battle with anything BBC, massively misquoted and then pilloried him for embellishing a widely known fact (that Hugo Boss made uniforms for the Nazi’s, but not the SS, during the Second World War). GQ and Hugo Boss should perhaps be grateful that he didn’t remind HB that they were early users of slave labour.

Brand’s excellent article in The Guardian last Friday puts his side of the story – and while he’s at it pin-pricks Boris, William Hague and Charles Moore. He also reminds us all that ‘the glamour and glitz ‘ of these events ‘isn’t real’ – from the Oscars and the Emmys through to The Brits and BAFTA’s, we are not looking at reality. It’s an event with a commercial sponsor, sales objectives, paid attendees, a media partner and an agenda aimed at selling something to ‘us’.