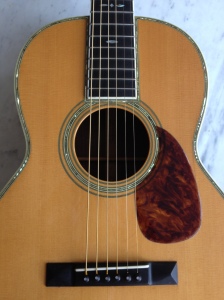 This was the first Martin I acquired back in the early 90s. I traded in an Ovation Celebration in order to achieve the then object of my desires – not realising it would start me on to the path of collecting other quality small bodied steel guitars. This pre-owned Martin was bought from Slide ‘n’ Pickit in Worcester – who then specialised in Nationals and small bodied American guitars. Small bodied guitars were not that prevalent… the re-introduction of parlour guitars and other small bodied guitars into the standard ranges of major makers had yet to happen so S’n’P were one of few places that carried them. The 00 was considered  a really small body size in a world where the Jumbo and Dreadnaught ruled, although in the 1890s when this model first appeared it would have been considered a relatively large body when 000 was the largest size Martin regularly made. The Style 42 was one designation down from the fanciest decorated guitar Martin offered, the Style 45. The 42 has abalone inlay around the top edge and where the 12 fret neck joins the body… a Style 45 repeats this but adding abalone inlay on every other side edge including the back and the end pin.

This particular guitar was a Custom edition made in the late 80s, the original catalogue models having been in production continuously from 1897 through to 1938. This guitar was spec’d with a Style 45 zipper marquetry inlay down the back join, which looks very fancy. It has Indian Rosewood back and sides with a tight grained Sitka Spruce top which has developed a beautiful honey colour. The guitar came with a rather cheap but standard Martin plastic pick guard which was replaced by Tor-Tec faux tortoise, custom made by John Greven Guitars in the US.

Weighing in at just 2½ pounds it’s very lightly built – which in this case is reflected in the sound. Martin guitars had a quality  problem in the 1970s when the company realised that the Lifetime Warranty offered on every guitar was costing them a fortune. So they started building their guitars with much heavier tops and joins to reduce the risk of the tops warping or cracking – resulting in what many view as ‘dead’ instruments. The company got back to its former quality in the late 70s and this guitar feels, looks and plays beautifully. It has an enormous sound for its size and fingerpicks in a balanced way – and the slightly wider than usual neck is well suited to picking.

The 00-42 has recently had a new bridge and bone saddle – the factory original was a rather clumsily made version which did not echo the subtle three cornered pyramid bridge of the originals. This, along with a new bone nut and a refret, was carried out sympathetically by Celine Camerlynck of Luthiers Corner, Denmark Street.

The guitar is now fitted with new Thomastik Infeld strings – recommended by Celine, they have a wonderful tone and a slight slack softness that really suits this guitar. As easy to play as Silk and Steel but with much greater clarity.