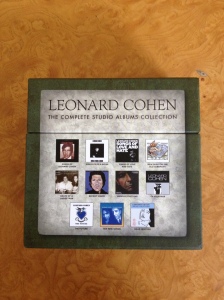 Even though I have long had every LC album on original vinyl, CD and remastered CD for his first three albums, this is still an excellent buy primarily as every disc has been beautifully remastered. The new masters make a real difference to the older albums and in particular to the less well regarded albums like Various Positions and Recent Songs. These are really two little gems, the 1985 released Various Positions has so many stand out tracks… the erotically charged Dance Me to the End Of Love, the lacivious Night Comes On, the original reading of Hallelujah and the haunting If It Be Your Will. Jennifer Warnes is much in evidence singing second and backing vocals… while Leonard has always been able to pick the perfect female counterpoint to his ‘gift of a golden voice’ Warnes still stands out as the perfect foil… the other comporable coupling of razor blades and honey being Emmylou Harris with Dylan on Desire.

Each album is in terms of track order and content exactly as they were released – LC was dissatisfied with the earlier re-releases which had bonus tracks containing earlier versions or alternate takes. Getting the set is also a wonderful prompt to work through the reportoire in chronological order once again and just appreciate how many wonderful songs from both the early, under-rated mid and much appreciated late period there are.

And not forgetting the Live In London CD as a memory of what still holds up as the best live music experience in over 40 years of seeing my musical heroes and villains.