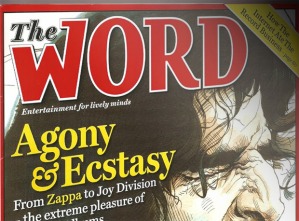 One of my favourite magazines The Word, announced this morning that next month will be its 114th and final issue.

It’s tough in the publishing world at the moment – in truth it’s been especially tough for the last decade – but, after getting over the shock of losing a trusted, engaging and delightful friend, I wondered why this magazine couldn’t make when it seemed to get so many things right…

The magazine covers contemporary music, books, film, DVD and popular culture and is primarily targeted at 35+ AB males – a lucrative and traditionally difficult audience to reach and one that is attractive to many advertisers.

It has a strong subscription base with big incentives for subscribers to hang on in.

Every edition came with a free CD of new music – not just dross but the sort of music Word readers might really be interested in.

The publisher and editorial director, David Hepworth, is a big blogger and tweeter and leads a relatively large and active Twitter community.

There is an engaging weekly podcast – a free 15 minute podcast sampler is available for free on iTunes. If you wanted the full, unexpurgated, album-length deal you have to subscribe to the magazine.

There is an excellent website, effectively an open blog, which is to the readers their on-line community. A ridiculously vibrant and active group of regular and ad hoc contributors on all things music and popular arts associated.

The Word hosted music events on a pretty regular basis in a London music pub and held reader events every few months in venues both in London and well beyond the M25.

It has been the media sponsor of the Latitude Festival, one of the major UK music and arts festivals, for the past few years.

The Word was well regarded in the publishing industry – voted UK ‘Music Magazine Of The Year’ in 2007 and 2008 and Mark Ellen, the magazine’s editor was this year voted Editors’ Editor of the Year by the BSME.

So with lots of things right, what went wrong?

The publisher cites “dramatic changes in the media and the music business…plus the general economic climate…that have made it more difficult for a small independent magazine to survive and provide its staff with a living”.

The most recent ABC figures for The Word, covering the last six months of 2010, showed that the magazine’s circulation dropped 5.7% year on year to 25,048.

So perhaps it was a more fundamental issue – there may have been a gap in the market but there was not a big enough market in that gap.

Sad news for an intelligent, well crafted magazine that understood and catered for its target audience.

This article was originally posted on the CRICKET blog: 29 June 2012